As I sit in my home office here in the suburbs of Philadelphia, watching the snow plows clear the latest 6-9 inches of snow we got this morning, I'm mesmerized by the following letter. It has transported me to a hot, desolate empty field in North Carolina in 1914, and then back 50 years earlier to a Civil War battle. The letter was written my Russell H. Conwell, my church's pastor from 1882-1925. He wrote back to his congregation his thoughts since he'd just visited the battlefields and recounted his memories of those days, including a story of a young soldier, Johnny Ring, who died saving his captain's beloved sword. Conwell is best known for founding Temple University, and helping fund many students' educations through funds he earned through his lectures, including his most famous one, "Acres of Diamonds." Below is my typed version, but if you read on you can see Conwell's letter in his own handwriting. 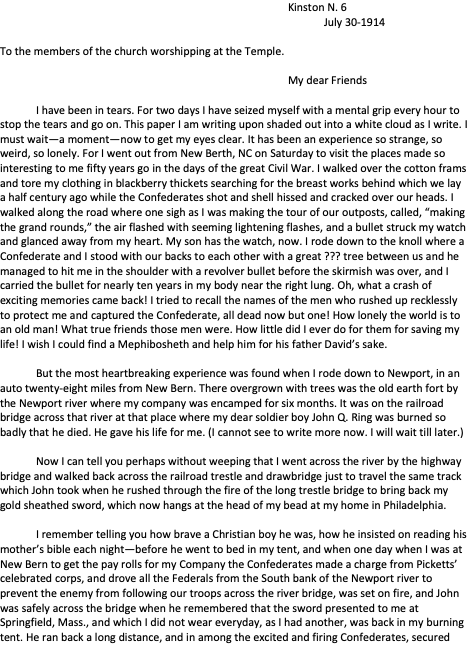 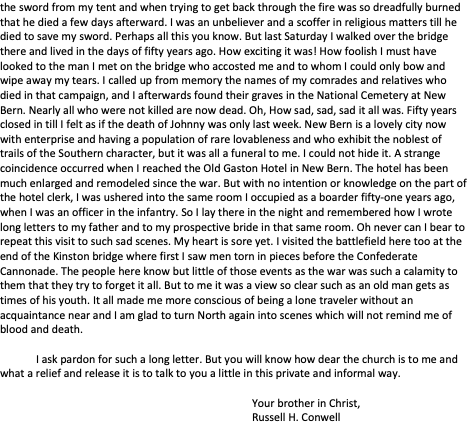 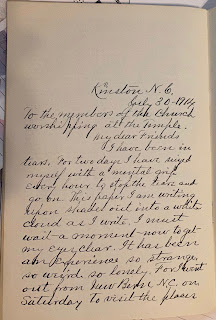 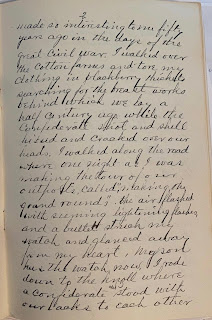 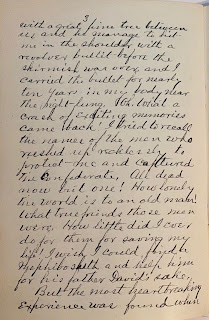 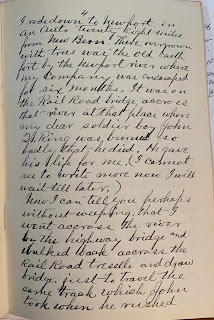 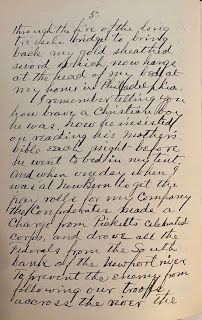 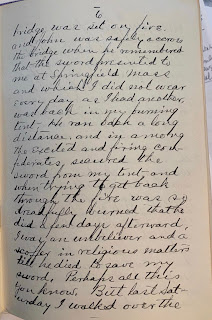 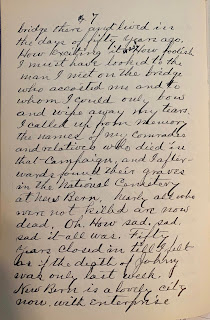 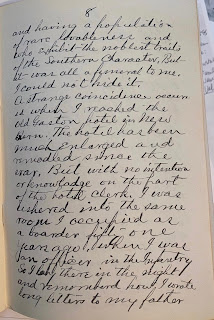 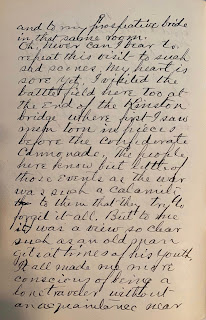 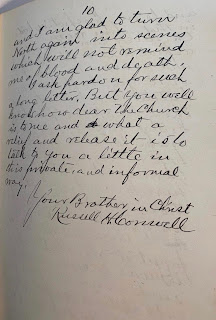 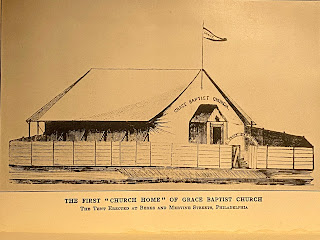 On May 16, 1870, a group of young men from the Young Men's Christian Association of the Tenth Baptist Church of Philadelphia decided to establish a mission in a rapidly developing section in the northern part of the city.  They secured a hall at Twelfth Street and Montgomery Avenue and began meetings to determine how to attract more souls to Christ.  The outpost was known as The Kennard Mission.   Among the young men were Alexander Reed and Henry C. Singly who went on to become deacons at Grace Baptist Church.  Frederick B. Greul, D.D., became a pastor at the Berean Baptist Church.  Another, John A. Stoddart, was the first superintendent of the Sabbath, or Sunday school at Grace Baptist. The mission was formally organized on February 12, 1872 with 47 members.   The Kennard Mission flourished and on August 25, 1872, they moved out of the hired hall and built a tent with a seating capacity of 500 at the corner of Berks and Mervine Streets.  In Robert J. Burdette's The Modern Temp
Read more

November 01, 2020
On October 18,  2020 Grace Baptist Church celebrated its music ministry.  This year was difficult to imagine as most years during our Music Sunday each of our music ministry programs is part of the Sunday program.  However due to the COVID-19 pandemic, we are not meeting as usual (mostly on Zoom, but a handful of limited, safely-spaced indoor and outdoor services).  Instead, members of each of the programs spoke, and a short video from the past was shown.  Although much different from our typical Music Sunday, many found this particular Music Sunday especially touching and a great praise to God for helping us use the gifts he's given us. Children's Ministry Gene Stremme "Music is an important part of worship at Grace Baptist.  And, kids are an important part so music and kids just kind of go together.  We accomplish this through singing, ringing tone chimes, dancing.  Yes, we have dance--the Dobrovolec girls are really good!  We also clap, we jump up and down, shake things
Read more
December 31, 2020 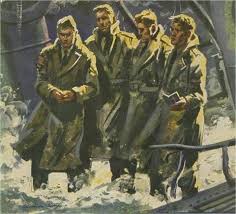 The Four Chaplains Greater love has no one than this, that someone lay down his life for his friends. – John 15:13 On a frigid February 3, 1943, the US troop ship Dorchester was sailing through rough seas in a convoy out of Newfoundland bound for Greenland.  They were about 150 miles off the coast.  Down in the old converted cruise ship’s stifling hold, 4 US chaplains circulated among the frightened young men, some lying wide-eyed in their bunks, others nervously playing cards or shooting dice.  Chatting with the troops, the chaplains eased tensions, calmed fears and passed out soda crackers to alleviate seasickness. The troops anxiously looked forward to reaching Greenland the next day.  They knew that U-boats prowled their ship’s course.  They did not know that by morning nearly 3/4s of them would be dead, and that the rest would have their lives changed forever.  Nor did they know the magnificent way in which these four chaplains would minister to them. Father John Washington was fr
Read more